This is a continuation of "Prism for Silverlight/MEF in Easy Samples Tutorial Part1" tutorial.

In this part, I cover Prism Region Navigation, which allows changing a view displayed or active within a Prism Region. (For region definition and samples look at the first part of this tutorial).

Region Navigation functionality within Prism allows loading a view within a region based on the view's class name, passing navigation parameters, making decisions whether the view should be displayed or not, cancelling the navigation if needed and recording the navigation operations.

On top of the prerequisites listed for "Part 1" (C#, MEF and Silverlight), one also needs to understand the MVVM pattern for some of the samples in "Part 2".

This sample's code is located under SimpleRegionNavigation.sln solution. It demonstrates basic navigation functionality. Module1 of the sample application has two views: Module1View1 and Module1View2. Both views are registered with "MyRegion1" region within the Module1Impl.Initialize method (view discovery is used to associate these views with the region):

There are two ways to navigate to a view within a region:

These two methods are very similar, except that RegionManager.RequestNavigate function requires region name as its first parameter, while Region's method does not require it.

One can see that both methods require a relative Uri argument, whose string matches the name of the view we want to navigate to.

Many times, however, the post-navigation callback is not needed, and then the following simple lambda can be placed in its stead:

IsNavigationTarget method allows the navigation target to declare that it does not want to be navigated to, by returning "false". This method is most useful with injected views as will be shown below.

OnNavigatedFrom method is called before one navigates away from a view. It allows doing any pre-navigation processing within the view that has been navigated from. In case of Module1View2 we show a message box:

OnNavigatedTo method is called after one navigates to the view. It allows doing any post-navigation processing within the view that has been navigated to. In case of Module1View2 a message box is shown:

Within Module1View2 we show a message box, asking whether the user wants to continue navigation or cancel it and the argument to "continuationCallback" is determined by whether the user pressed OK or Cancel button:

This is how the application looks when it is started: 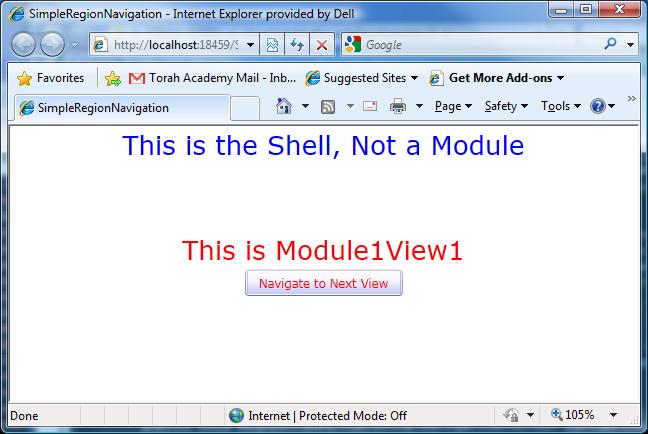 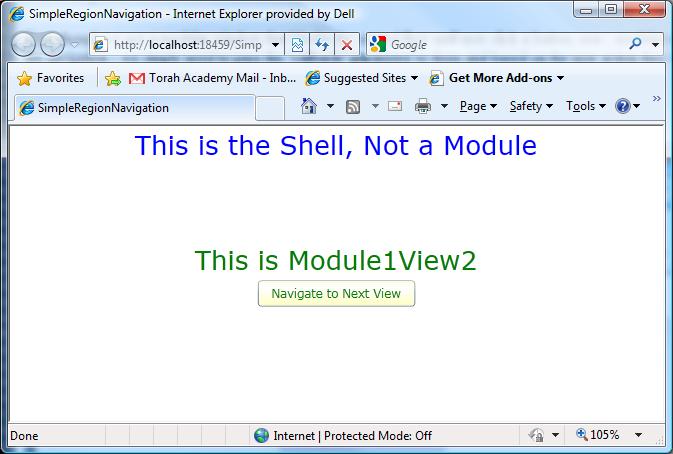 If we click "Navigate to Next View" button now, we'll hit the Module1View2.ConfirmNavigationRequest method first, which will show us a popup window asking whether to continue navigation or cancel it. If we press ok, navigation to Module1View1 continues successfully, otherwise it fails and we stay at Module1View2. (In case of successful navigation we get two more modular popups - one indicating that we are inside Module1View2.OnNavigatedFrom function and one informing us that the navigation was successful, while in case of a navigation failure we are informed of it by a message popup)

Exercise: create a similar demo (look at "Prism for Silverlight/MEF in Easy Samples Tutorial Part1" for instructions on how to create projects for Silverlight Prism application and modules and how to load the module into the application using the bootstrapper).

Exercise: create a similar demo with the two views located in different modules instead of them being within the same module.

Simple Navigation via the View Model

The rule is the following: if the view implements one of INavigationAware or IConfirmNavigationRequest interfaces than the view's corresponding methods will be called during the navigation. If, however, the view does not implement it, but the view's DataContext does, then the corresponding functions of the DataContext will be involved as demonstrated by our sample under NavigationViaViewModel.sln solution.

Module1View1 is almost the same as in the previous sample (aside from the fact that it does not popup message windows).

Module1View2 does not implement IConfirmNavigationRequest. Instead, within the constructor, it sets its DataContext property to be a new object of View2Model type:

View2Model is a non-visual (as a view model should be) class that implements IConfirmNavigationRequest:

We use the view model's ShouldNavigateFromCurrentViewEvent event to inform the view that navigation has been started away from it. The view connects a handler to this event within the view's constructor:

Just like in the previous sample, View2Model.view2Model_ShouldNavigateFromCurrentViewEvent displays a modular popup window asking whether the user wants to continue or cancel the navigation. Then, depending on the user choice it returns a Boolean to the view model and the View2Model.ConfirmNavigationRequest's "continuationCallback" argument is called with the corresponding value specifying whether to continue or cancel the navigation.

If a view or a view model implements INavigationAware or IConfirmNavigationRequest, interface, the navigation can pass parameters to these functions as part of the navigation Url. As I mentioned above, the Url should contain the name of the view class to which one wants to navigate. This name of the class can be followed by '?' character and key-value parameter pairs where the keys are separated from the values by '=' character and the pairs are separated from each other by '&' character.

NavigationParameters.sln solution contains a sample where the view Module1View1 navigates to itself but with different parameters.

Here is how the sample's window looks: 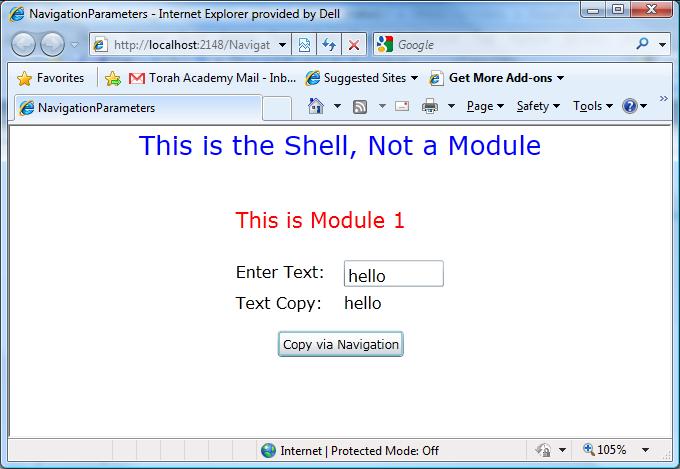 The "Copy via Navigation" has the following callback:

Note that the full Url will look like: "Module1View1?TheText=<text-to-copy>".

Of course, in reality, RequestNavigate and OnNavigatedTo functions can be in different views and even in different modules, and instead of a trivial task of copying text, other much more complex tasks requiring navigation parameters might be employed.

In case of the view injection there can be multiple views of the same view type within an application. Navigating based on the Url containing the View class name only, will not work in that case, since all those views have the same view class. Prism employs bool INavigationAware.IsNavigationTarget(NavigationContext) method to specify which view to navigate to in such case.

The corresponding sample is located under InjectedViewNavigation.sln solution. Unlike in previous examples, the region control is represented by a ListBox in the application's Shell.xaml file:

so that it displays every view connected to the region and navigating to a view makes this view selected within the list box: 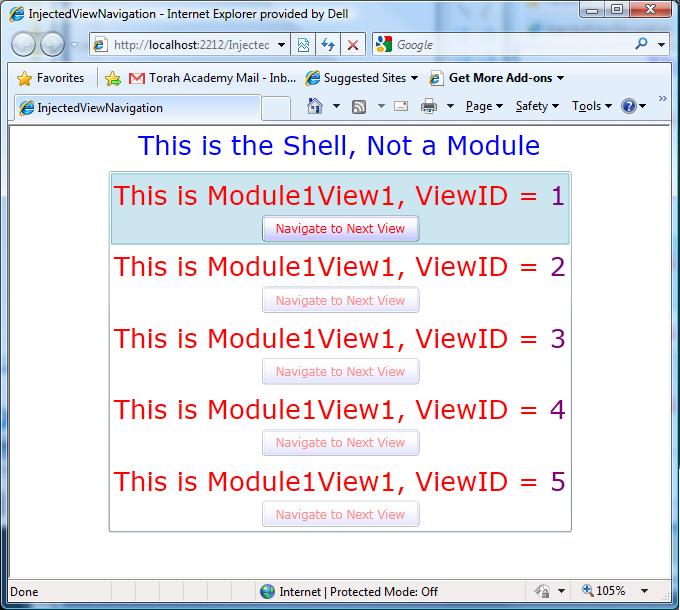 The view is defined by Module1View1 class. It has ViewID property that uniquely specifies the view object. This class also has a static method CreateViews() which creates 5 views with different ViewIDs ranging from 1 to 5 and associates the created views with "MyRegion1" region:

Each view has a button to navigate to the next view. The button click has the following event handler:

As you can see, we navigate to the "Module1View1" view passing "ViewID" parameter set to point to a value returned by NextViewID property.

NextViewID returns the ViewID of the current view plus one unless it is the last view in the set - then it goes back to ViewID=1:

IsNavigationTarget method compares the "ViewID" parameter received as part of the Navigation Url to the ViewID property of the view. If they are the same, it returns true (this means we navigate to this view), if they are different, it returns false (the view is not navigated to):

One can see that by pushing the view's "Navigate to Next View" button, we indeed switch to the next view. After changing NextViewID property to return every second view, we can see that every second view in the list gets selected. If we change the region control within Shell.xaml file of the application project to be a ContentControl instead of a ListBox the navigation will be displaying the navigated view instead of selecting it.

Navigation functionality also includes undo-redo capabilities as shown in this sample. The sample is located under NavigationJournal.sln solution. 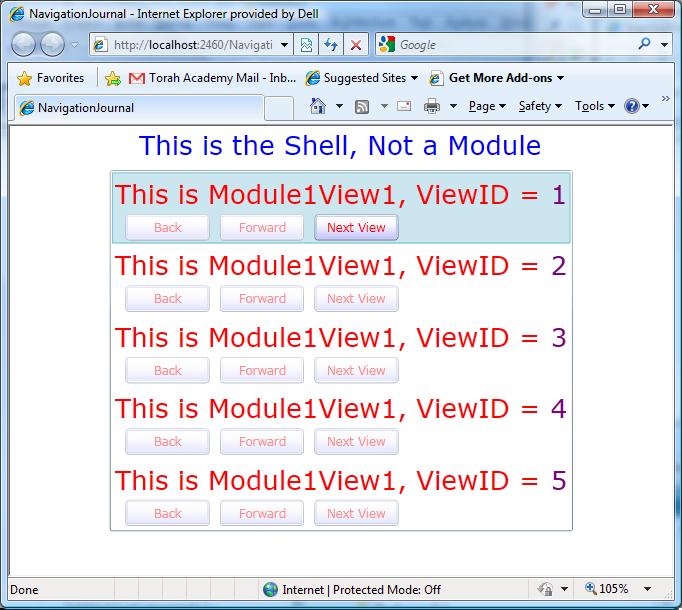 "Back" and "Forward" buttons are enabled only when the corresponding operations are possible.

Here is how "Back" button hooks to the corresponding Undo functionality:

Button enabling/disabling functionality is based on _navigationService.Journal.CanGoBack and _navigationService.Journal.CanGoForward properties for "Back" and "Forward" buttons correspondingly. It seems that it is logical to add button enabling/disabling functionality to the body of OnNavigatedTo method (which is called on Undo-Redo), but unfortunately it is called before the navigation Journal state is updated, so that the CanGoBack and CanGoForward properties do not have the correct values yet. In order to get around this problem, I had to figure out which view is current based on the Uri property of the current entry within the Journal. We get the ViewID from the Uri and set IsEnabled properties on the "Back" and "Forward" buttons of the corresponding view:

Method UpdateIfCurrentView is set as the static JournalUpdatedEvent event handler for each of the created views:

Important Note: the journal undo/redo functionality works only within one region. If there are multiple regions each one of them will have their own undo/redo sequence.

In part 2 of this tutorial I gave a detailed description of Prism's Navigation functionality in small and simple samples. I'd appreciate very much if you could vote for this article and leave a comment. I would love to hear your suggestions for improving and expanding the content of this tutorial.

Feb 15, 2011 - changed the code to use latest Prism dlls (which lead to significant changes in API: INavigationAwareWithVeto interface was replaced by IConfirmNavigationRequest, CanNavigateTo() was replaced by IsNavigationTarget() and method OnNavigatedFrom was added to INavigationAware interface. Hat tip to jh1111 for noticing that my API was out of date.
关键字 prism for silverlight,mef in easy samples. part 2,prism navigation
推荐.NET配套的通用数据层ORM框架：CYQ.Data 通用数据层框架